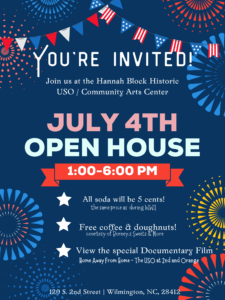 Celebrate July 4th with Thalian Association Community Theatre at the Hannah Block Historic USO/ Community Arts Center open house! The public is invited to join us between 1:00 – 6:00 pm when staff will be in 1940’s era costumes, serving free coffee, and doughnuts courtesy of Burney’s Sweets & More with sodas at the WWII price of 5 cents.  A documentary celebrating the USO building will be showing all afternoon.

The lobby in the Hannah Block Historic USO Building has been restored to its 1943 appearance complete with reproduction furnishings and WWII exhibits. The exhibits include memorials to Medal of Honor recipients Charles Murray and Billy Halyburton,

a painting of building namesake Hannah Block, WWII memorabilia, a tribute to the 9th & Nixon USO, and the National WWII Memorial Giclee.

The documentary film Home Away From Home – the USO at 2nd and Orange will be shown all afternoon on the Hannah Block 2nd Street Stage. The 5-minute film was produced in 2016 by Emmy nominated filmmaker Rob Hill to honor the 75th anniversary of the Historic USO Building. The film captures the building’s rich history beginning with WWII, the transition to a community center and how it continues to serve our community today.

The Second and Orange Streets USO Club was erected by the Army Corps of Engineers at a cost of $80,000 and opened in December 1941.  At the height of the war, attendance reached 63,000 per month. Typical events included big band dances, plays, music recitals, art exhibits, hobby shows, guest lectures, wedding receptions, and weekly radio broadcasts. On weekend nights, 600 men crowded into the basement dormitory.

After World War II the City of Wilmington purchased the building for use by the Department of Recreation. In 1973 the building was renamed the Community Arts Center and placed on the National Register of Historic Places the following year. The Community Arts Center was rededicated in Hannah Block’s name in 2006, in honor of one of Wilmington’s most distinguished civic leaders and WWII veterans, and in 2016 received the James D. & Rosalie Carr Memorial Plaque from the Historic Wilmington Foundation, Inc.

Today the Hannah Block Historic USO/Community Arts Center is one of three Type A USO buildings still standing and serves as a major cultural resource for area residents. Thalian Association has managed the building for the City of Wilmington since 1994.

On Sept. 2, 2020, Wilmington became the first city in the country to be designated as a World War II Heritage City by the U.S. Secretary of the Interior. The designation celebrates contributions by Wilmington to the World War II home-front war effort, and efforts to preserve and honor those contributions. The Battleship NORTH CAROLINA Memorial and the restoration of the Historic USO Building are the foundations of those efforts.